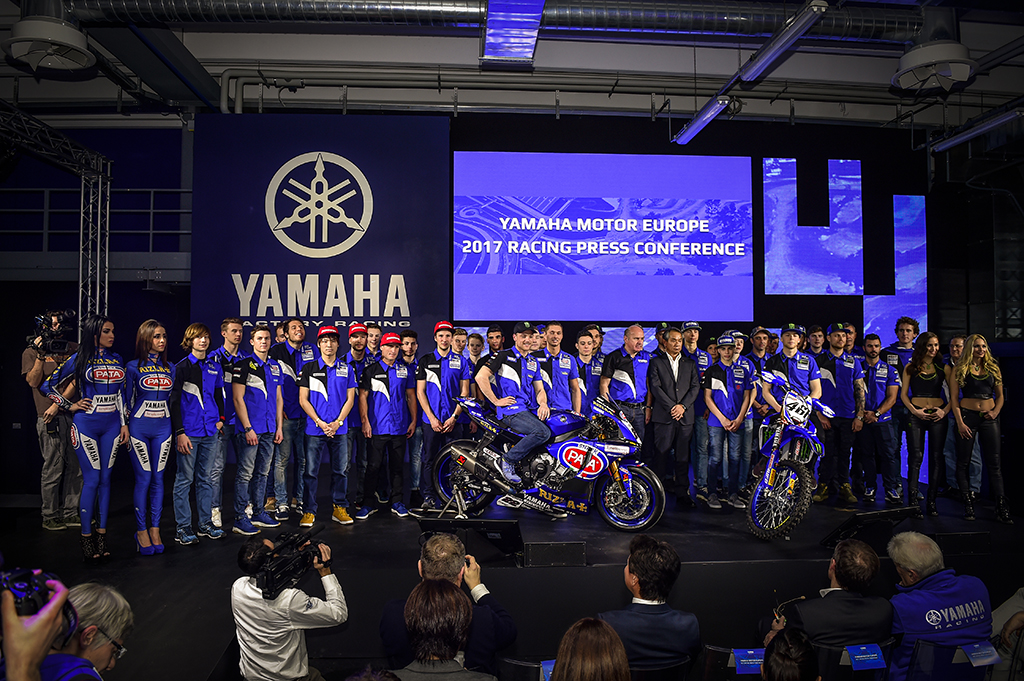 As the new racing season draws closer, Yamaha Motor Europe N.V. took a moment between pre-season testing activities to gather all of the Official Yamaha Race Teams, both On and Off-Road, for an Official Race Teams Press Conference. The special event took place on the 7th of February at the Movistar Yamaha MotoGP team headquarters in Gerno di Lesmo, Italy, where all of the Official line-ups and their 2017 liveries were presented to the international racing media.

Hosted for the third year running by MotoGP Championship commentator Gavin Emmett, the event saw an impressive 15 teams and 41 riders and their team managers unveil their impressive Yamaha machinery to the gathered press and partners. Prior to the teams unveiling, Yamaha Motor Europe N.V’s Chief Operating Officer, Mr. Eric de Seynes, took a moment to share his insights on the 2017 line ups, and on Yamaha’s racing strategy with some additional information and statistics regarding the Off-Road market sales.

Kicking off the motocross sector, Yamaha Motor Europe N.V’s Motocross Racing Manager Erik Eggens shared the strategy for the coming year before making room for the Monster Energy Yamaha MXGP Factory Team, who were present to reveal their 2017 colours. 2015 MXGP World Champion Romain Febvre and 2014 MXGP Vice World Champion Jeremy van Horebeek took the stage as Yamaha’s factory squad. Both riders are feeling fitter and faster than ever, and are determined to take their YZ450FM’s to the top in 2017.

Meanwhile, Wilvo Yamaha Official MXGP have stepped up from MX2 this year and will join the Factory Team in the premier class. The team has placed a YZ450F in the very capable hands of highly acclaimed motocross talents Arnaud Tonus and Shaun Simpson. Tonus is a former MX2 Grand Prix winner who is making a welcomed return to the FIM Motocross World Championship after spending the past two years racing in America, while Simpson is one of Great Britain’s finest who claimed his first ever MXGP Grand Prix win onboard a Yamaha back in 2013 in the sand of Lierop, The Netherlands.

“It feels to be great back on Yamaha, I haven’t spent too much time on a YZ450F, I loved my YZ250F though, so the 450 is new but I think it fits really well with my style and I am just looking forward to Qatar and being up front in MXGP” Tonus said.

Set to shake things up in MX2, Gavin Emmett introduced the Kemea Yamaha Official MX2 Team that boasts three highly touted youngsters, Benoit Paturel, Brent Van doninck and Alvin Östlund. “We have already achieved our goal for 2017,” Hans Corvers, Kemea Team Owner said, “Benoit’s goal for last season was top five, so the next step was top three, and he has already achieved that as well. The next thing will be to be world champion and I think he has a good chance.” All three riders are eager to put their YZ250F’s on top of the box.

After entering the 2016 YZ125 bLU cRU Cup and winning it, young Swedish hopeful Tim Edberg landed a dream ride on the MJC Yamaha Official EMX125 team alongside two other kids that are chalked as a couple of the most promising young riders in Europe, Rick Elzinga and Thibault Benistant.