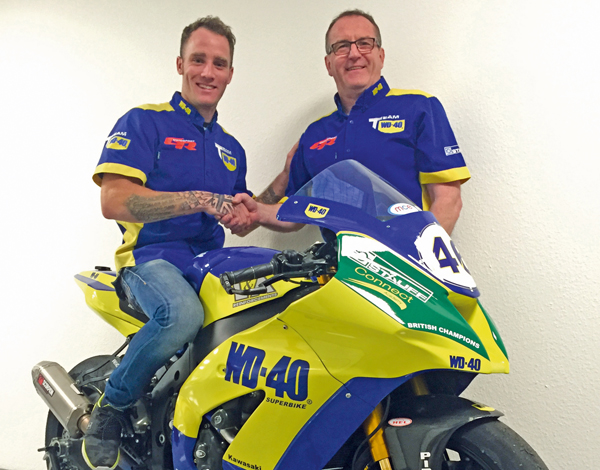 Tommy Bridewell will line up in the 2017 MCE Insurance British Superbike Championship with the Sheffield-based GR Motosport team aboard the new Team WD-40 Kawasaki ZX-10RR.

The 28-year-old from Devizes, who is a twice MCE BSB race winner, was a podium finisher at Oulton Park last season and set pole position at the Brands Hatch season finale, finishing eleventh in the final standings.

Bridewell has twice been a Showdown contender and returns to Kawasaki following a successful spell in 2013 which resulted in two podiums.

Bridewell said: “I’m happy to be teaming up with Brent and pleased to be riding for Kawasaki once again so I’m really looking forward to the season. I know the team has pushed the boat out to ensure I have a really competitive package and that’s the main reason I’m here.

“They are as determined as me for success and with the help which Kawasaki are giving us, and the reputation on new the ZX-10RR which came so close to winning the title last year, I intend to be challenging from the start.”

Team Managing Director Brent Gladwin said: “As soon as we started talking with Tommy, there was no one else we wanted on the bike and I’m delighted he’s joined us. We know we have a great team and the new Kawasaki ZX10-RR, with the support from Kawasaki, will help us immensely.

“Our Team Manager Geoff Crust and Tommy are really on the same wavelength about what this opportunity means so it’s our intention to maximise that potential. Be in no doubt, we are here to challenge for the title and with Tommy and Kawasaki, I believe we can do that.”

Ross Burridge, Kawasaki Racing Co-ordinator commented: “The WD-40 Kawasaki team have grown into one of the most competitive teams in the BSB paddock, showcasing this brilliantly by taking the British Supersport title last year, Kawasaki’s first in 26 years.

“I truly believe that now is their time to take it to the next level and make their mark in the Superbike class. With a wealth of knowledge and experience, plus the services of the talented Tommy Bridewell, the recipe is certainly there for success. I wish them the best of luck for 2017.”