Action at Soaring Eagle Casino & Resort came to a thrilling conclusion on Saturday night, as Round 12 of AMSOIL Championship Snocross Powered by RAM featured two remarkable main events at the Soaring Eagle Snocross National. This included one of the more sensational passes for the lead that has been seen thus far this season. Coming out victorious in the premier Pro class, Tucker Hibbert would charge from mid-pack to earn yet another win in the 2017-2018 season. Hibbert would execute a pass on the reigning champion, Kody Kamm, to win tonight in Michigan . And in Pro Lite contest, Daniel Benham continued to impress. The Arctic Cat rider would dominate the class as he was uncontested, leading every lap of the main event.

As the Pro Lite qualifying races began Saturday for the Soaring Eagle Snocross National, the points leader Daniel Benham chalked another holeshot win on the chalkboard as he started to gap the field early in heat one. Andrew Lindholm executed his best start of the weekend as he found himself in second. Martin Moland started the race in the fifth position, but as three laps were completed, he found himself now in third. Daniel Benham completed the flag-to-flag victory with Martin Moland finishing in second and Viktor Herten third. In the second heat of the first round, Korbyn Anderson led the field as fellow Ski-Doo rider Marcus Ogemar slotted into the second place spot. Korbyn Anderson would make a huge mistake forcing him off his snowmobile and outside the top five. Anderson’s misfortune benefited Ogemar as he now was the race leader with Andy Lieders second and Aki Pihlaja third. Ogemar would run a near flawless race as he would win his first qualifying event of the weekend. Reigning champion, Aki Pihlaja, made a late race charge on the second place rider but would fall short to the composure of veteran racer Andy Lieders. Travis Kern would lead the pack up the hill in Michigan as the final heat of round one began. Nisse Kjellstrom found himself in second with Round 11 winner, Jacob Yurk, close behind. Yurk would execute the pass on his fellow Arctic Cat teammate and set his eyes on the heat race leader Travis Kern. Kern would hold off the multi race winner, and earn his first heat race win of the weekend. Yurk continued his Michigan success and finished second, while Evan Daudt rode a strong third. Unfortunately, Nisse Kjellstrom had a last lap crash taking him out of third, and forcing him down to the eighth place spot.

With the riders looking to earn a good qualifying position for the final, Evan Daudt nailed the holeshot in round two, as he is looking to be one of the top qualifiers for the final race, later in the evening. Daudt would later be passed by the new leader of Andrew Lindholm. Daudt would make little mistakes but Andy Lieders was able to power around his fellow Polaris rider. Lieders would then start to battle with Lindholm for the lead, but would have an issue forcing him to have to qualify through the LCQ. As the checkered flags flew it was Andrew Lindholm taking the win, Evan Daudt second, and Viktor Herten in third. In the second heat of round two, the points leader Daniel Benham would once again earn a great start but would be surprisingly passed by fellow Arctic Cat racer, Nisse Kjellstrom. Kjellstrom would lead the beginning laps of the race but the pressure from the points leader was too much to handle as Benham would take the lead and run away to victory. Kjellstrom earned himself a second place in round two and Zak Mason would round out the top three. In the final Pro Lite heat race of the weekend, Aki Pihlaja had his best start of the weekend and found himself leading heat three. Round 11 winner, Jacob Yurk, started the race in the runner up position but after mistakes fell back to fourth. Pihlaja would lead the entire race flag-to-flag but the battle for second heated up. Travis Kern and Jacob Yurk would go back and forth the second half of the race, with the edge going to Kern. The top three went as followed: Pihlaja, Kern, Yurk.

The final race of the weekend for the Pro Lite class featured nothing less then brilliance for the points leader Daniel Benham. The factory Arctic Cat racer would pull off his best start of the weekend and run away to victory with ease. The reigning champion, Aki Pihlaja, also had a great start as he came off the line in second. This race was somewhat of a comeback race for Pihlaja, as he did not make the final in Round 11. Andrew Lindholm was sitting in podium contention early in the race but due to small mistakes the Arctic Cat rider would fall to fifth. With the mistakes of Lindholm, Travis Kern and Jacob Yurk would capitalize and move into top five positions. One of that favorites for this evenings final was Nisse Kjellstrom. Kjellstrom would have an off early in the race and take him out of the running to extend his podium finish streak. Five laps into the main event, the leader Benham has already stretched his lead out to nearly four seconds. The battle for third was tight as the halfway flags flew in Round 12. Jacob Yurk and Travis Kern were swapping positions back-and-forth as they battled for the final spot on the podium. Yurk would execute the pass cleanly and look to make it a two podium weekend in Michigan. Hunter Patenaude struggled in qualifying today but in the final he was able to make the best of the back row starting position and found himself in the top seven. Martin Moland also was having a strong night aboard his Arctic Cat and rode in fifth looking to chase down the #201 of Travis Kern. When the double checkered flags flew it was Daniel Benham riding perfectly,. to win with a five second margin of victory. Aki Pihlaja would bounce back this evening and finish second. The final spot on the podium was last nights winner Jacob Yurk. 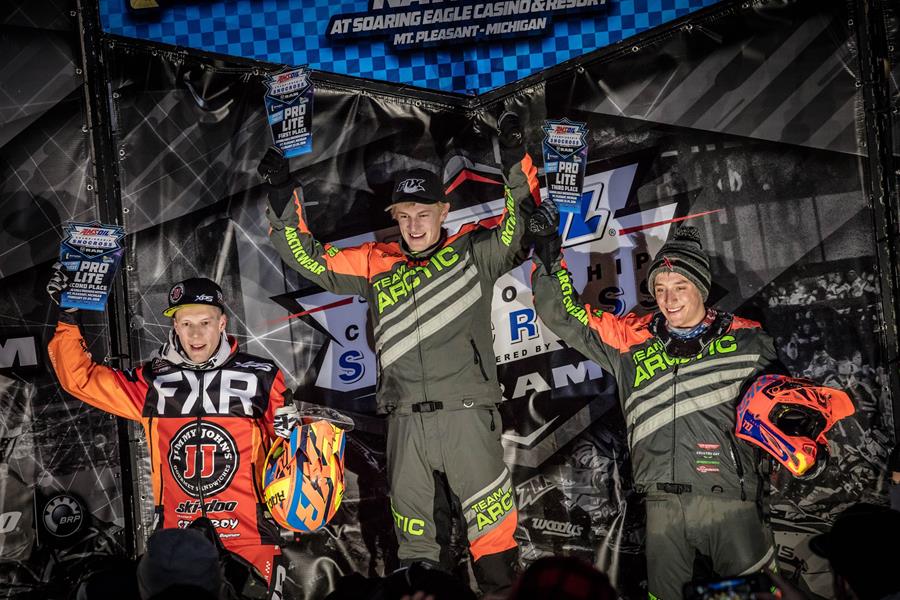 In the first heat for the Pro class in Round 12 of AMSOIL Championship Snocross, Henteges’ Racing teammates, Petter Narsa & Kody Kamm, would put on a great show for the fans. The Polaris duo would checkout from the field as they followed one another close intact. Narsa would have very much pressure from the reigning champion, but would hang on to earn himself five extra bonus points. Kamm would finish in second while Tim Tremblay charged hard from the rear of the field to finish third. The final Pro qualifying race showcased the consistency of Johan Lidman in Mt, Pleasant. Lidman would have a great early lead but would start to feel the pressure from Lemieux and Christian. The two riders chasing the leaders would put in a valiant effort but would not execute the pass due to the speed of Lidman in round one. Tucker Hibbert had a poor start, as he crossed the finish line in eighth and worked hard to pass racers to finish in fourth. Top three from heat two: Lidman, Lemieux, Christian.

With the final qualifying races of the weekend for the Soaring Eagle Snocross National taking place, Montana Jess would look for more success, as the first heat race starts to make way. Logan Christian was also able to get a good start and found himself in second while Lincoln Lemieux was third. While in the third position, Lemieux would make contact with Christian, forcing the Round 11 winner to have an off. With the off for Lemieux, Petter Narsa slotted himself into third. At the halfway point of the race Logan Christian was able to carry more momentum in the big triple section to execute a pass over Jess. The pursuing lap saw Petter Narsa make the same move as Christian and get passed Jess. Logan Christian would pilot his Arctic Cat to the heat race win after a rough day yesterday. Petter Narsa crossed the finish line in second and Montana Jess would be third. In the final Pro heat race of the weekend, Tucker Hibbert put on a Snocross clinic. The Monster Energy/ Ram Truck/ Arctic Cat rider had to move from fourth to first in the first lap to solidify a race with no roost. Hibbert would battle with Kody Kamm on the uphill of the first lap, making contact on his way to a dominating heat race win. Kody Kamm fell back to third after grabbing the holeshot, but made the pass on Travis Muller to finish the race in second. Muller would then finish his qualifying efforts with a third.

The huge crowd at the Soaring Eagle Snocross National witnessed an incredible battle between last years Pro champion, Kody Kamm, and the 10x National Champion, Tucker Hibbert. Kamm would jump out to the early, being followed closely by Johan Lidman and Petter Narsa. Tucker Hibbert had a better start this evening as he slotted into the fourth position. Logan Christian and Tim Tremblay executed strong starts as well, as they rode in the fifth and sixth spots early in the main event. On lap three, the third place rider Petter Narsa would have a crash that unfortunately pushed him to the rear of the pack. Tim Tremblay would make an aggressive move on the rough downhill here in Michigan to move past Logan Christian. Kamm, Lidman, and Hibbert have pulled away from the rest of the field as the race starts to fully take shape and reach the halfway point. On lap 10, Tucker Hibbert chose a smooth, smart line to get by Lidman and solidify the second place spot. With only six laps to go in the main event, Tucker Hibbert has caught Kody Kamm and was doing everything he could to get by his fellow Monster Energy Athlete. Kamm would stay low in the corners blocking every passing move Hibbert would try to make. With four laps remaining, Hibbert saw his opening and blasted into the lead. Kamm would battle back, and rub with the multi time champion before Hibbert started to slip away. Hibberts block pass was nothing less then perfection. With only one lap to go in the main event, Hibbert was on cruise control looking for yet another win. Kamm also sat easily in second, but Lidman had much pressure from Tim Tremblay. Tremblay would make a great last corner pass moving him onto the final spot on the podium. Tucker would have redemption tonight in Round 12, as he was the winner while Kody Kamm finished second. Tim Tremblay rounded out the podium giving him a double podium in Michigan. 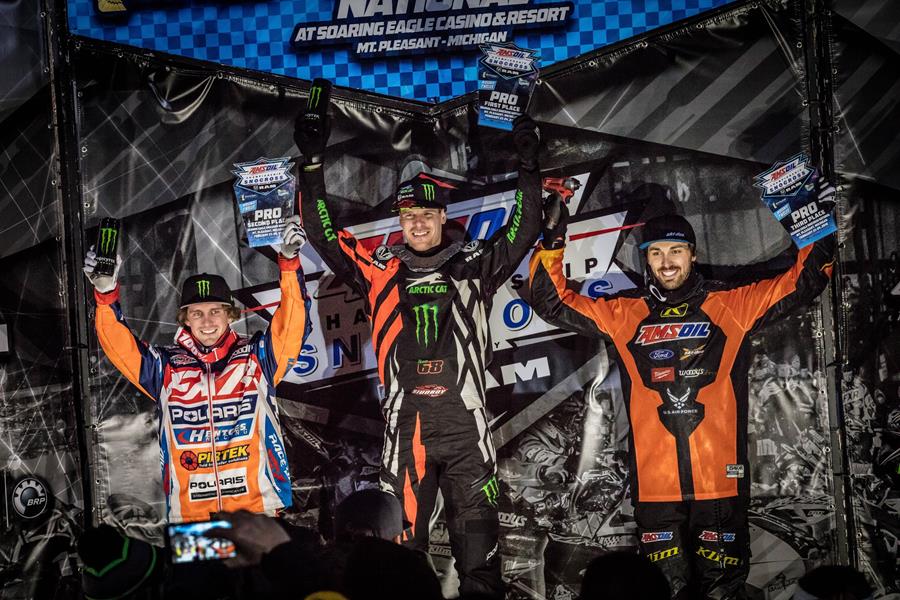 Malene Anderson would have a huge holeshot, and would rocket her Arctic Cat to the early lead. Anderson would take the win in Round 12 as she rode with minimal mistakes. Reigning champion Elina Ohman finished the final in second and the current points leader, Megan Brodeur, rounded out the top three.

Matt Pichner extended his win streak in Michigan, as he was victorious tonight in Round 12. Nick Zandstra would run an impressive second place and Kurt Bauerly would take up the final spot on the podium. 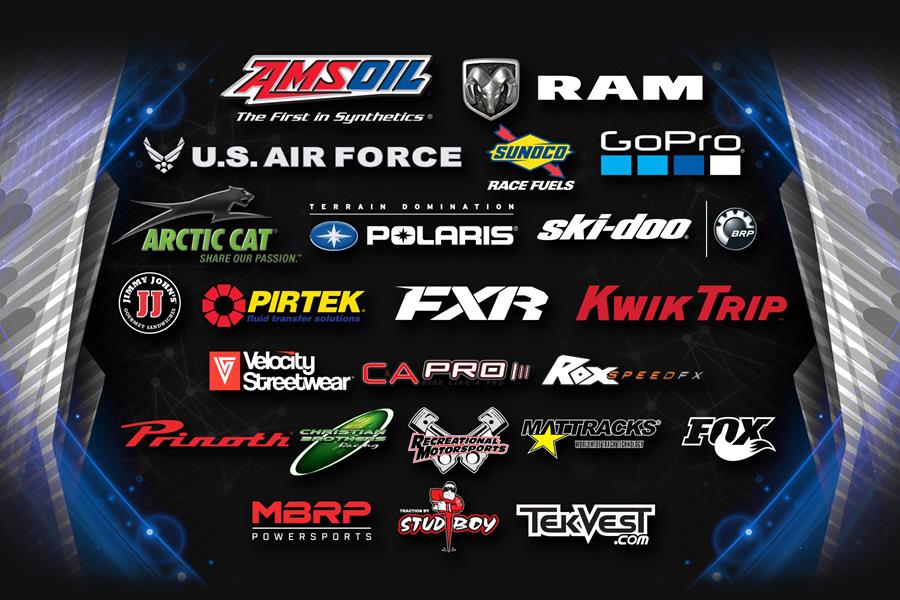