Clement Desalle of the Monster Energy Kawasaki Racing Team maintained his challenge for honours at the sixth round, the GP of Europe at Valkenswaard, of the FIM World MXGP Motocross Championship. 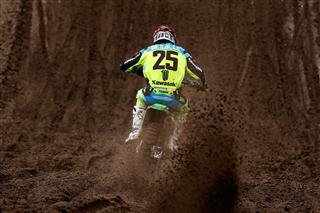 The Belgian had maintained a strong qualification challenge to take fifth choice of gate but difficult first laps saw him emerge eighth and ninth after the initial sort-out. A solid ride in the opening race saw Clement advance to seventh, but a small crash halfway through race two cost him to lose his rhythm to eventually finish fourteenth. The Belgian is now sixth in the series standings but just twenty points shy of the third placeman.

Unable to train in sand during the week after feeling sick teammate Maxime Desprey managed to improve his lap times after each practice session, but his twenty-second choice of gate after a difficult qualification race meant that he started each time outside the top twenty in the GP motos. The Frenchman advanced methodically towards the points during the early laps of each moto, but fatigue caused by sickness slowed him during the final laps to finish twenty-second and twenty-third.

Clement Desalle: “Once more the start was the key to the races, and twice I was in the top ten but that’s not enough to finish on the box. The first race was OK with a seventh position, even if it’s not what I expect, but in the second one I had a crash and lost four positions. I struggled to find a good rhythm today; I had a better feeling on Saturday when I qualified in fifth position.”

Maxime Desprey: “It was a tough weekend. As I was sick this week I couldn’t train in the sand so I knew that it would be difficult, but the feeling was better after each session even if I qualified only in twenty-second position. In both races I was fighting for a top twenty result, but in the last ten minutes of each race I felt tired and lost several positions.”